Operation Santa Claus (OSC) is an annual giving campaign established by the South China Morning Post and Radio Television Hong Kong in 1988 to connect the local community to worthwhile charities, with the help of two of the city’s most respected media organizations. Now one of Hong Kong’s most popular charity campaigns, OSC has brought joy, goodwill, and HK$188 million to 176 charities over the years, sharing the gift of hope to those who lack the means to improve their lives.

Children’s Medical Foundation is thrilled to chosen as one of the Operation Santa Claus 2013 charities. Contributions will sponsor “A Chance at Life for Rural Newborns,” to help establish a new Neonatal Care Unit in Southwestern China, where medical and economic development lags far behind that of the major cities.

Through your contributions, a core team of neonatal doctors and nurses will receive advanced training in one of China’s top pediatric hospitals, and new, state-of-the-art medical equipment will be donated, significantly improving the medical standard available to babies born in this region. 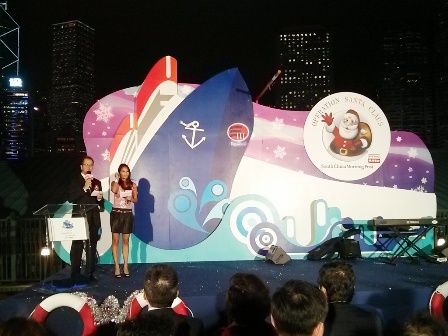 (Above Left) Bryan Curtis and Crystal Kwok welcome the sponsors and beneficiaries of the Operation Santa Claus campaign at the launch event at the Hong Kong Maritime Museum. (Above Right) Operation Santa Claus Honorary Patron Regina Leung talks about the importance of charity, generosity, and the giving spirit.