When CMF evaluated its programs in 2008, we realized that in order to maximize the impact of our Neonatal Care Units in rural areas, we had to tackle a number of other basic problems that were limiting these babies’ access to health care. In our conversations with health care workers in our network of hospitals, it became apparent that one of the barriers to accessing advanced care for sick newborn babies was in the trip to the hospital: babies born in remote rural areas were being transported in the arms of their parents in motorcycles or cars, on public buses, or were not able to make the trip at all.

With this in mind, CMF’s comprehensive neonatal health program includes a specific program to develop an emergency transport system with the hospitals which house our Neonatal Care Units. Our Mobile Emergency Response Unit (MERU) Program provides a support system for the region within a 4 hour travel radius surrounding our hospitals. CMF funds the set up and management of the unit, training of staff in the hospital and surrounding health care facilities served by the program in the preparation of newborns for transport, and the purchase of specialized equipment (a neonatal ventilator, incubator and monitor) to be installed in the hospital’s ambulances.

CMF’s pilot project site at Zunyi Medical College Hospital has seen the MERU in operation for a number of months. Recently the MERU was able to transport a premature baby, from Renhuai City 120kms to the north of Zunyi to the hospital. This baby boy was born at 30 weeks (2-3 months early) and was in respiratory failure. Medical staff from Zunyi Hospital were able to use the equipment provided to them to safely intubate the baby and transport him to the NCU in Zunyi. They noted that the travel conditions were terrible as large coal trucks had ruined the roadway, but the baby survived the voyage and they were able to continue his treatment in the hospital’s NCU. He is the first baby in the history of Guizhou Province to have been intubated and on a ventilator while being transported – he’s the first baby ever in the province to be able to make use of this technology that is relatively accessible elsewhere in the developed world. 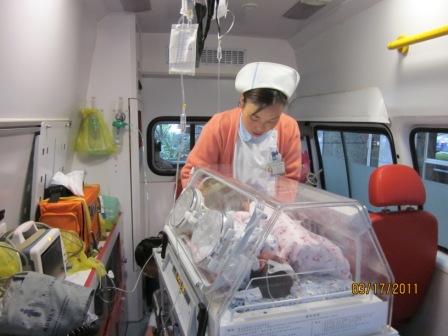 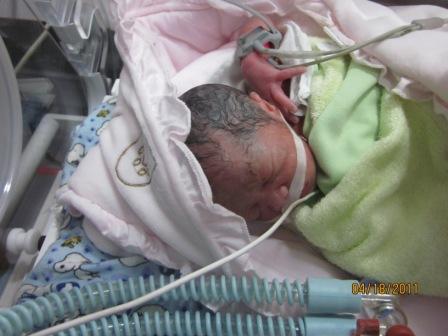